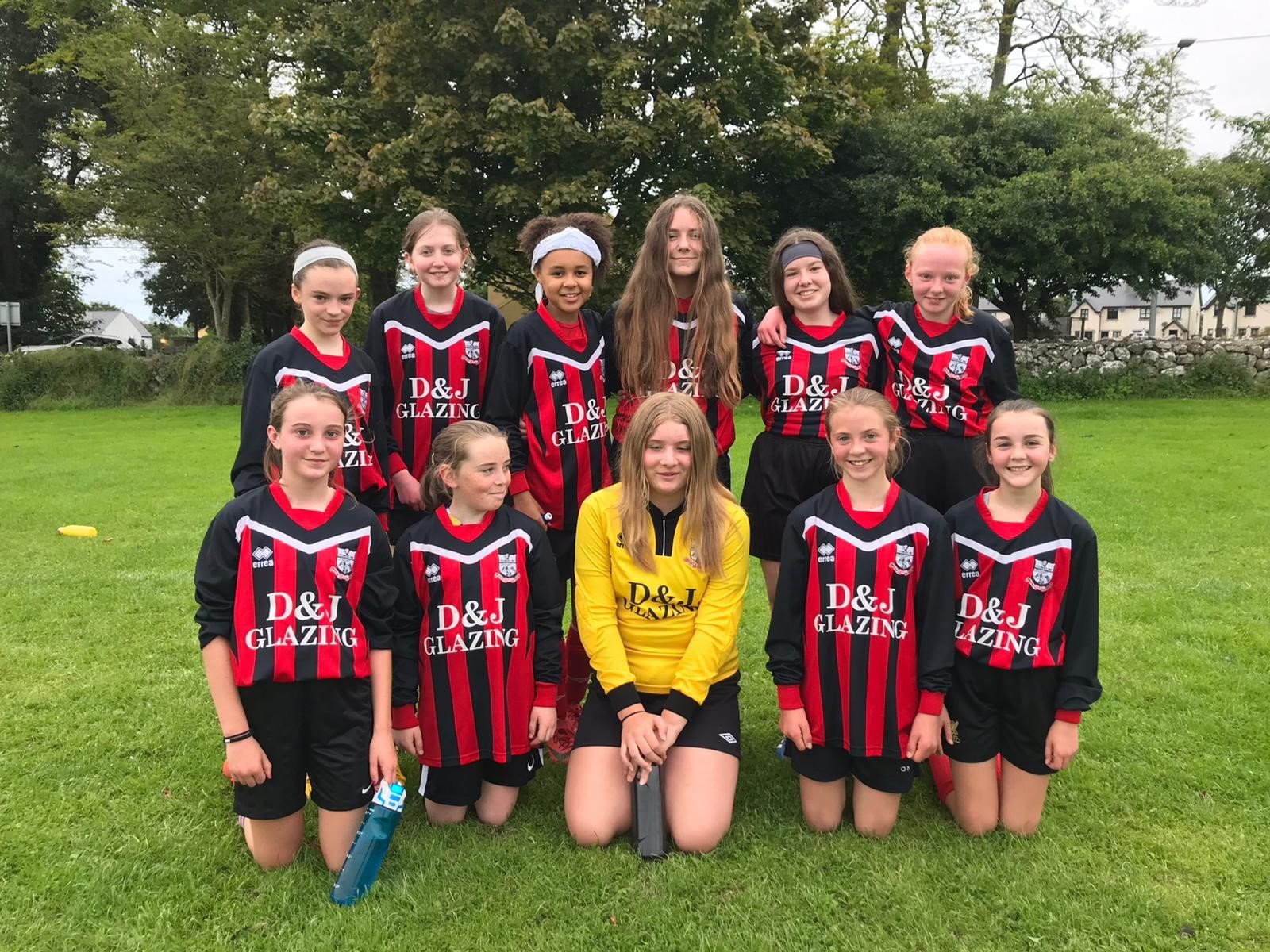 Published: about 2 months ago

Another busy, game packed week for the club with huge matches for both Mens side and the eagerly anticipated FAI Youths Cup Semi Final on Saturday.

The first fixture of the week saw our Under 12 Red side travel to Corofin to take on Corofin Harps in a very tight game. This team is going from strength to strength recently and is improving all the time. Emily Reddan got on the score sheet for The Bridge who were very unlucky not to pick up any points on the night.

Our Senior B Team travelled to Bunratty to take on near neighbours BunrattyCratloe. The Bridge got off to a flying start when Eoghan Maxwell and Daniel Scullion hit the back of the net early in the first half. Our B side were made to work hard to extend the lead though, with Bunratty digging in and defending well to keep the score at 0 – 2, and hitting the Bridge side well on the break but the end result was lacking.

This trend continued throughout the second half. Manager Darren Brown chose to introduce fresh legs from the bench, which proved to be the kick that the Bridge team needed with 2 of the substitutes finding the back of the net. Firstly, Jake Dineen timing his late run in to the box in open play to hammer a header home for our 3rd goal. The 4th goal came from excellent work down the left hand side, the ball was worked in to the box and Ronan Touhy, who was extremely unlucky with a previous effort that hit the post, finally got the goal his play and movement had deserved to kill the game off before the hosts got a late consolation goal to leave the result at 1 – 4.

A night that saw both of our under 12 boys teams in action against Avenue and Burren United respectively. Charlie Keane & David Purse were the standout performers for our Black Team. For our Red Team, a first half double by Alex Gladys and a superb left footed strike from Donal O’Leary put Bridge on their way in Lisdoonvarna last Tuesday. Despite the horrible conditions both teams played some great football. A fourth goal from a Conor Gleeson back heal was the highlight of the second half. A super team performance with special mention to Killian Slater and Luke Deegan who excelled.

Our Under 16 A team made the same trip to Lisdoonvarna to play directly aftet the U12s and the performance was just as impressive. Scoring 5 on the night through Seamus Quinn (2), Brendan Carey, Colm Hennessy & Leon Daly, who also grabbed an assist, the Bridge side came away with all three points with management keen to point out that it was a fantastic performance from all the lads involved.

Lastly on Tuesday night, the U16 B side hosted Tulla United in what proved to be a difficult night for the Bridge men. Luke O Connor was on the scoresheet for the home side but Tulla were a bit too good for the lads on the night, running out 4 – 1 winners.

With both Under 10 sides travelling away from home to take on Newmarket and Coole FC on Wednesday night, our Mens A Team had a massive game against Lifford to try and overcome. Needing one more win to assure they didn’t get pulled in to any relegation battle.

With the Lifford side looking in great form, taking the lead twice throughout the game, our lads showed some unbelievable heart to stay in the game with equalisers coming from Kieran Quinlan & Jordan Downes. The pressure kept on coming though and the defence had to stay strong and were being excellently marshalled by Paul Touhy in goals and Jonathan Downes, Touhy pulling off a spectacular penalty save in the second half. With 20 minutes remaining, Ethan Slater was introduced from the bench by stand in manager Albert Finnan and it was Slater who would settle the game. The ball went high up in to the air during a passage of play, dropping 20 yards plus out from the Lifford goal. Slater struck a fantastic left foot volley in the bottom corner of the net to keep all 3 points in the Bridge.

A fantastic win for the lads on a tough night that ensures we will see Premier Division soccer in Shannon road again next season.

On a night that saw 2 of our U11 sides in action against Coole and Burren United and also our U14 A side registering an impressive 8 – 1 win against Mountshannon, Darragh Hayes, Matthew O Halloran, Isaac Deegan, Jack O Halloran, Reece Kirkland (2) , Aidan Moloney & Niall Moloney all getting on the scoresheet and impressive performances by Niall Liddane, Calum Phelan & Marcus Joyce.

Our senior B Team travelled to Gort. A crunch tie between Coole, the league leaders & Bridge United B in second place. A win for the Bridge would see them leapfrog Coole and go in to top spot with 2 games remaining. A loss would be extremely damaging to their title hopes.

Coole FC started the game very brightly and took the lead in the first 5 minutes with a great strike from outside the box that flew past Paul Touhy in goals, leaving the keeper with no chance. The Bridge dug in though and started to control the midfield and create more chances. The pressure paid off with an equaliser from Trevor Maxwell. The ball was worked down the left hand side of the pitch and a sublime cross was begging to be attacked. Maxwell did not disappoint with a fantastic leap and header at the back post to level things up going in to half time.

The Bridge continued their control at the start of the second half creating multiple chances but were unable to take any of these from play. They did however get a penalty awarded, which Trevor Maxwell calmly put away. The pressure then came from Coole with tensions starting to boil over at points in the game. Understandable considering what was at stake. The result would be decided by a second penalty, this time to Coole. After some impressive last ditch defending by the Bridge men, one strike from a Coole attacker struck one of our defenders on the hand. Penalty awarded and clinically put away, the game finishing 2 – 2.

Friday evening saw the usual excitement and energy that comes with a field full of under 8 boys and girls training, but their one topic of conversation throughout the evening. That was the small matter of an FAI Youths semi-final the following day.

The grounds were ready, the pitch looking fantastic and everything set for a huge game.

In a very tense first half, the deadlock was finally broken on 40 minutes. Douglas Hall took a deserved lead when a 25 yard strike gave Will Fitzpatrick no chance in the Bridge nets. Unfortunately for the young Bridge men, things were about to get worse, 2 minutes after the first there was confusion in the Bridge defensive line who didn’t take a couple of opportunities to clear the ball away from danger. 2 – 0 to Douglas going in to the break, all to do for The Bridge.

Our Youths team did rally in the second half, controlling more of the ball and pushing for a response to put pressure on the Cork side. This was despite losing their striker Conor Maxwell after a bad head collision 2 minutes in to the half. The Bridge were in the ascendency with Leon Daly going close on the hour mark and a big penalty shout turned down on 78 minutes when Eli O Sullivan went down in the box. Douglas killed off the game 2 minutes later with a penalty of their own. Going 3 – 0 up on the day.

A gritty and spirited performance by the Bridge who came up against a very well organised Douglas side who’s defence were very impressive on the day.

Another hugely successful cup run for this side and their management team that all parties should be extremely proud of. The Youths still have a league decider upcoming to focus on.

The Bridge lads started this match very strongly and settled well. An unfortunate bounce of the ball gave Hibs a 1-0 lead mid-way through the first half. The young bridge men kept up the pressure but couldn't break down a stubborn Hibs defence. Two more goals in the second half followed for Hibs but the Bridge produced a very solid performance and deserved something more from this match.

This will stand to the lads for next week's match against Corofin at home.

Saturday also saw our Under 15 A side in action against Ennis Town. A Goal from Brendan Carey ensured the Bridge came home from Ennis with a point after a 1 – 1 draw.

The second fixture in 4 days for our A side saw Shannon Hibs travel in to Shannon Road for an 11am kick off. After the win mid-week the pressure was off and after an initial scare with Hibs taking the lead, the Bridge took control of the game after equalising before half time.

Jordan Downes claimed a hatrick on the day with Kieran Quinlan keeping up his impressive run of goals with another fine finish. The 5th goal of the day was put away by Dan Scullion, after Hibs grabbed a second goal.

2 wins from 2 in the week for the A side, which has meant they have jumped up the table and will look to finish the season strongly.