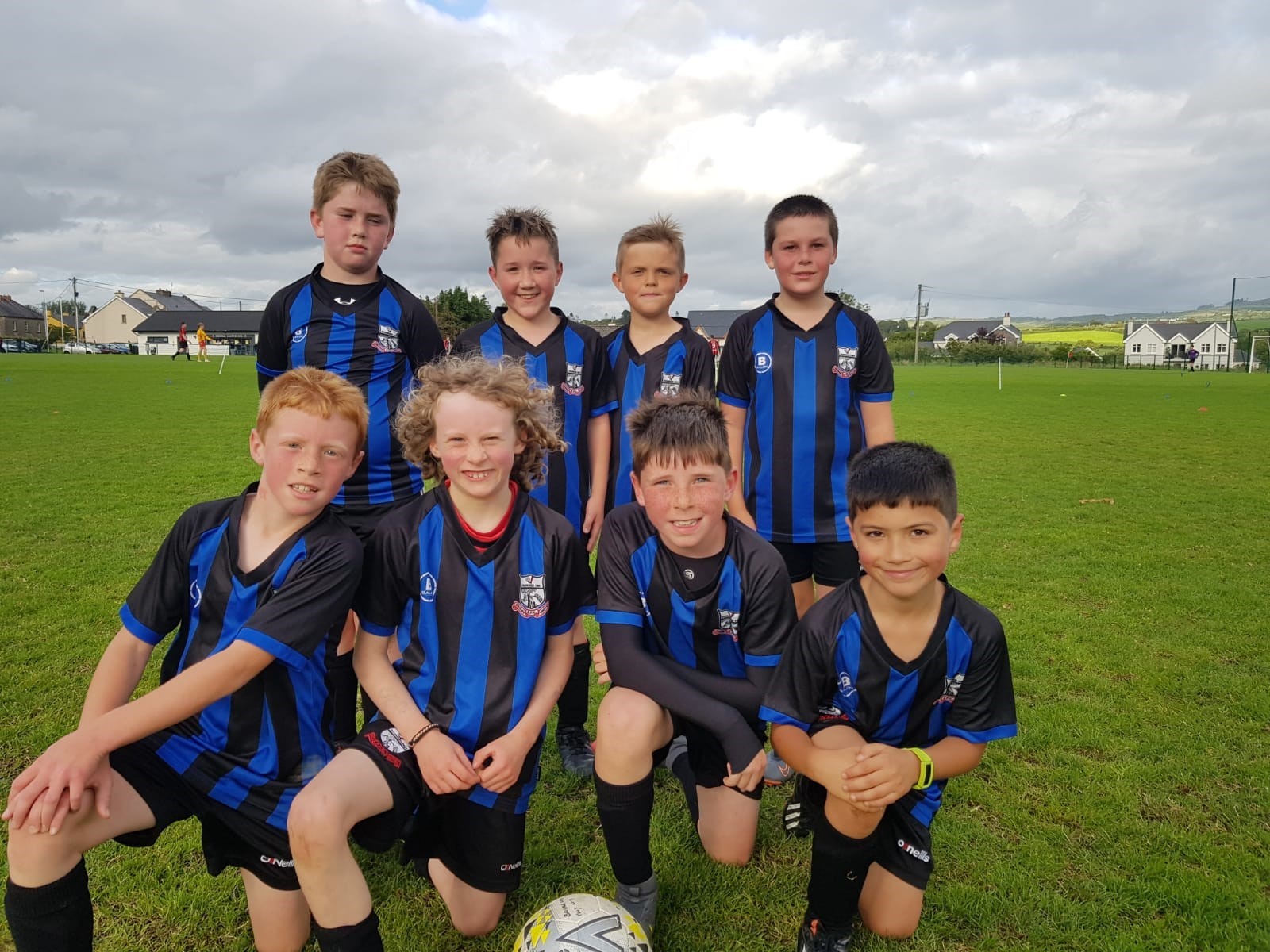 Published: about 2 months ago

In the latest instalment of our Week in review series we were treated to another jam packed week of action with underage leagues continuing, crunch time for our mens teams and the small matter of a Munster Cup Semi Final for our Youths side on Sunday.

Bridge United took part in 6 different fixtures on Monday night this week. Our Under 12 Girls teams played their latest games in their league campaigns. Both teams travelled away from home to Shannon Town and Fern Celtic respectively.

Our Under 9s season kicked off in style with some outstanding performances across the board on the night.

Amongst the goal scorers for our Red team were Morgan Barrett, Erik Bejemariu, Aaron Murphy, Sam Murphy, Jack Monahan & Gordon Flynn in a superb team performance against Tulla. Our U9s Black Team were also in fantastic form when they took on Shannon Hibs. Alex Davey, Jack Reddan, Timmy Sheehan and Cillian Rafferty all hit the back of the net on the night with the management team keen to stress how excellent each and every player was when they took to the field.

Our U9’s White team were all ready to go with their fixture against Newmarket but unfortunately the opposition were unable to field a side on the night so they will need to wait a bit longer to make their league debuts.

Also on Monday night, our Under 17 Team welcomed Avenue United U17 to Shannon Road. On an extremely rare off night for this particular Bridge side, the game slipped away from them in the second half. After an extremely even and competitive first half, Avenue end up winning by 4 goals to 0.

Tuesday night saw 4 four Bridge Teams in action. Our Under 12 Red team took on Shannon Town at home and our Under 12 Black team made the trip to Gort to take on Coole FC. Conor Gleeson and Zak Phelan were on the scoresheet for our Red Team while Killian McNamara was on target for the second week running for our Black team. Donal O’Leary, Conor Gleeson and Devin Downes were all in fine form against Shannon, while the stand out performers against Coole were Cathal Ryan, David Pearse and Charlie Keane.

Our Under 16 A Team took on Ennis Town on Tuesday evening when they welcomed Ennis Town to Shannon Road. In an extremely tough game, the young Bridge men were on the wrong side of a 3 -2 result even though a draw would have been a fair result. Colm Hennessy was on the scoresheet again for the A side, with Ennis Towns goalkeeper unfortunate for our second goal, deflecting the ball in to his own net.

The last result from Tuesday night. Our Under 16 B side took the short trip in to Shannon to take on Shannon Town’s B side. Another 5 goal thriller saw Ryan Perez and Tom Forde on the scoresheet but unfortunately the trip back to the Bridge was empty handed as Shannon scored 3 on the night to take all 3 points.

On a night that saw both our Under 10 teams travel away from home to take on Avenue and Tulla respectively, our A squad hosted Shannon Town in an extremely important match in regards to final positions in the Premier League table. In a tense first half, the Shannon side had a lot of possession but could not break the Bridge side down. The second half started off well for the opposition though as they scored 2 goals in quick succession, despite Will Fitzpatrick pulling off some fantastic saves in the Bridge net. A change in formation for the home side at 2 down lead to a shift in play with Kieran Quinlan grabbing one back for the home team but the equalizer never came.

Darren Browns B team played their final home league game of the current campaign when they welcomed Rhine Rovers to Shannon Road on Thursday night. With Rhine sitting second in the table and our B side sitting 3rd, this game was extremely important for both sides in the chase to catch Coole FC at the top of the table.

The Bridge side had a fantastic first half with Adam Fitzpatrick the stand out performer, coming close to opening the scoring on multiple occasions. The breakthrough didn’t come until the second half though. Trevor Maxwell made an excellent run down the right hand side and delivered a fantastic cross that was begging for a finish. Chris Griffin obliged with an unstoppable header from 6 yards past the Rhine keeper who did his very best to keep it out.

Another clean sheet for the B Team, their 3rd in a row, mean that they now sit 2nd in the table going in to the last 4 games.

Friday evening saw our Under 14 Girls team travel to The Fairgreen to take on Hermitage in what proved to be an extremely long night as they came away empty handed.

For our under 13 A side, a brave performance by a young Bridge team fell just short of taking the points in Roslevan on Saturday morning. Bridge went in front on 20 mins with a brilliant first half goal. The visitors played out from the back and into the feet of centre forward Conor Gleeson who fed the ball back to O‘Leary, Donals through ball was perfect to put Aleks Gladyz through on goal to score. Unfortunately Bridge ran out of steam in 2nd half and lost out to two late goals. Great performance however and lots of positives to take from performance.

Following on from a good performance last week this fixture was always going to prove to be a tougher challenge. With some good defensive work been put in and a few good saves from goalkeeper Finn Murphy the bridge were able to hold out until the twentieth minute when some good passing from Coole resulted in a 1-0 lead. Two more goals followed just before the break to leave it 3-0 at halftime. In the second half the Bridge players continued to battle hard and had some long range efforts from Marcus Joyce and Reece Kirkland but Coole ran out comfortable winners in the end. Next up are Shannon Hibs on Saturday where another tough challenge will be on the cards.

Our A Team played their second match of the week when they also travelled to Ennis to take on Avenue United on Saturday evening. The match started very well for the Bridge side when a long clearance was chased down by Mark Pewter who was then taken down inside the area. Penalty awarded and calmly put away for Kieran Quinlan for his second goal of the week.

2 goals from 2 corners for Avenue United towards the end of the first half meant the Bridge men trailed at half time. The second half was extremely tight with no goals until the last 10 minutes when Avenue got their 3rd anddecisive goal which meant they came away with all 3 points.

On Sunday morning, we saw the first outing for our U10 Soccer Sisters sides, who had 2 sides playing in a blitz in Tulla. Games were played against Bunratty, Coole FC & Tulla. A fantastic performance from all the girls throughout each game.

Heartbreak for our Youths side on Sunday afternoon when they travelled to Limerick to take on Ballingarry in the Munster Youths Cup semi-final. The Bridge side started the game brightly and nearly took the lead in the 3rd minute only for the Ballingarry keeper to pull off a great save to keep the scores level. The resulting counter attack from the home side saw them take the lead very early on.

The Desmond League side now had something to hold on to and were extremely impressive defensively, limiting the amount of chances to a minimum for our side. Evan O Callaghan struck a fantastic volley on 19 minutes that went narrowly over.

In the end in proved to be an extremely frustrating afternoon for the Youths side as they could not find a breakthrough, meaning Ballingarry progress to the Final. A monumental effort by the Management and squad to reach the semi-final stage in this competition and the whole club is extremely proud of the progress.

Next up for this extremely talented side, the FAI Youths cup semi Final in Sixmilebridge on Saturday in another massive fixture.