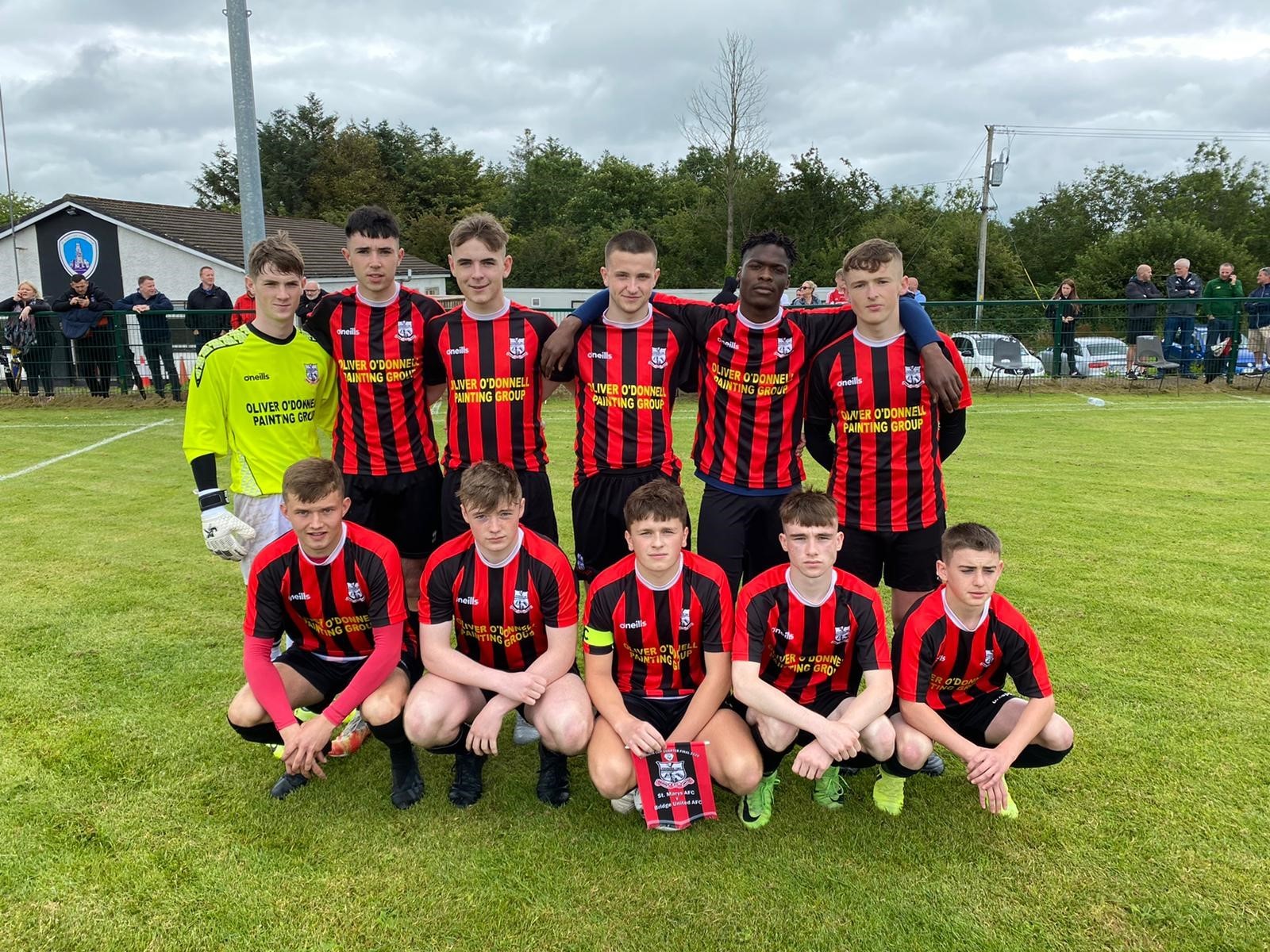 In what we hope will be a regular occurrence, we couldn’t have hoped for a more exciting week of action to kick off our ‘The Week in Review’ series.

On a night when our Under 12 Girls team kicked off their league campaign in Sixmilebridge against Connolly Celtic, our Youths Team made the short trip in to Corrib Drive in Shannon to take on second in the table, Shannon Town, on Monday evening. A win for The Bridge would clinch the league title. A win for Shannon Town would give them a distinct advantage going in to the last round of fixtures.

The Bridge took the lead on 37 minutes with a penalty from Liam Buckley. Shannon Town then struck an equaliser on 60 minutes only for The Bridge to take the lead 5 minutes later through Storm Devanney. The final 10 minutes of the game was non-stop drama with Shannon Town equalising for the 2nd time on 80 minutes and then taking the lead on 83 minutes.

The Bridge men were not to be defeated though as Scott Kirkland stepped up in final minutes with a thunderous free kick that found the back of the Shannon Town net. Honours even and the league title will go down to final round of fixtures.

On Tuesday night, we had multiple teams in action. Our 2 Under 12 Boys teams kicked off their seasons. Killian McNamara, Killian Slater, Aleks Gladyz, Zak Phelan & Devin Downes were all amongst the goals. Dillon Keogh & Evan Madigan also had a fantastic game for U12 Black team.

Bridge supporters were treated to another 6 goal thriller when our Under 16 A squad welcomed Avenue United to Shannon Road.

Adam Murphy Black, Ian Collins & Colm Hennessy all hit the back of the net for The Bridge and a special mention is given to Leon Daly who was magnificent on the night, winning a penalty for the home side and also grabbing an assist for our third goal.

Bridge United A 0 – Newmarket Celtic A 4

In a busy evening of football on The Bridge pitches, Wednesday saw our 2 Under 10 sides kick off their respective league campaigns at home.

Our senior A side had a tough fixture when they welcomed the league leaders to Shannon Road. With the game sitting at 1 – 0 to Newmarket, the away side had a golden 10 minute period in the second half where they scored 3 goals in quick succession. The Bridge upped the energy levels with some fresh legs from the bench but could not find a way through the opposition defence. Anton Mannering and his squad will take some solace that they are still the only team this season to take any points off the Newmarket men in the league this season after 14 games.

Thursday night saw our Under 11 Boys teams both travel away from home to take on Sporting Ennistymon & Avenue United respectively.

Our under 14 boys team travelled away to take on Moneypoint. Captained by Finn Murphy on the night, our young men put on a fantastic performance as they ran out 6 – 0 winners against the Kilrush side. Driven on by a complete performance in midfield from Aidan Moloney & goals from Jack O’Halloran (2), Reece Kirkland, Matthew O’Halloran (an absolute cracker we’ve been told), Isaac Deegan & Darragh Hayes from distance, made sure the squad travelled back in to the Bridge happy.

With our Under 11 & Under 14 teams all travelling away from home, this left our Junior B Team as the only fixture in Shannon Road that evening when they welcomed neighbours Kilkishen Celtic.

This proved to be a frustrating evening for our B side. With multiple attempts on goal and some very close calls they could not find a breakthrough. Kilkishen defended excellently throughout and an inspired performance in goals by the Kilkishen goalkeeper ensured they made the short trip back home with a well-earned point.

Friday night saw our Under 14 girls team kick off their league campaign with an unfortunate loss against Tulla United. The training pitches were also full of excited Under 8 boys & girls teams back training and everyone was looking forward to Saturdays fixtures.

The first competitive fixture for both sides in this seasons league campaign, The Bridge were narrowly edged out on Saturday morning against a very strong Shannon Hibs side despite a very good goal from Aleks Galdysz.

Saturday afternoon saw both our Under 15 teams back in action with the U15 B Team putting in a solid performance. Niall Liddane scored with a powerful header from a corner to take the lead the scoreline stayed 1 – 0 through to half time.

The Avenue keeper was unfortunate for our second goal when he spilled the ball in to the path of Marcus Joyce who slotted home Bridge Uniteds second goal of the game. 10 minutes later Joyce was on the scoresheet again when he hammered a strike in to the top corner to go 3 – 0 up. Avenue grabbed a consolation from the penalty spot just before the final whistle. An excellent start for this group, who now travel to play Coole FC in Gort in the next round of fixtures.

The Under 15 A squad made the long trip out to Lisdoovarna for their first fixture of the season. Despite a well taken goal from Deegan Greene, unfortunately the team came away from the match empty handed. They will now be looking to bounce back in the next round of fixtures.

Bridge Utd are through to their first ever FAI Youths Cup semi-final after a fantastic performance and away victory over St Mary's from Cork. St. Marys took an early lead after 13 minutes the Bridge men, buoyed by the amazing travelling support, struck back on 26 minutes when the excellent Leon Daly hit the target. The Bridge struck again after some great work by Thabiso Dube won a penalty that was calmly put away by Liam Buckley. 2 – 1 up at half time.

St. Marys didn’t take long to level the match, getting their second of the game on 60 minutes. This was followed up straight away by captain Kyle Walker going off with what looked like a serious shoulder injury. The Bridge team rallied though, getting their 3rd of the game on 78 minutes. Scott Kirkland with one of his signature free kicks. After his involvement in the first, Thabiso Dube wrapped things up, scoring the 6th goal of the day, Bridge Uniteds 4th, with 5 minutes remaining.

An excellent result for the Youths Management and squad, who now look forward to a home semi-final against Douglas Hall AFC from Cork.

Darren Browns Junior B side took to the field for the second time in 3 days when they welcomed Shannon Town to The Bridge on Sunday morning for an 11am kick off.

The Bridge took the lead half way through the first half. Eli O Sullivan, making his first senior appearance in the League for the club, fought hard to win the ball from the Shannon Town defence and got the break of the ball, he then hit a fantastic right footed strike from the edge off the box across the keeper in to the bottom corner of the net.

From that point onwards The Bridge needed to show their resolve as Shannon Town pushed for an equaliser. 3 top class saves from Paul Touhy each side of half time and some excellent defensive work from front to back across the team, meant that they kept a clean sheet and came away with the 3 points.

The final fixture of the week, our A team ensured that the weeks fixtures ended on a high note with an excellent 3 – 0 win on Sunday afternoon.

A win for The Bridge here would put much needed daylight between them and Sporting in the league table. A man of the match performance from Adam Fitzpatrick, scoring 2 goals and a third goal added by Darren Murphy from a corner ensured that the A team jump back above Shannon Hibs in the table.

A fantastic week of action for the club. With our underage section now back in full swing, our Youths team flying and the Adults section also continuing their season after the break, it promises to be an action packed few weeks to come.

A massive thank you needs to go out to Gavin Downes and all the rest of the clubs volunteers who have got all the pitches and facilities in top shape to allow the restart to happen. Top notch as always!